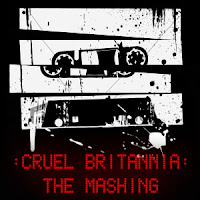 It's been a few years now since I was last involved in the dubious activity of smooshing two songs together to make one dodgy song. The 'mashup' business is as thick with contributing artists & DJs as any other part of the the music scene, so it's not like everyone stopped making mashups after I released "Emineldtritch-Without Lucretia". However, I can proudly say that it got airplay both sides of the globe in its time, and that's not something to be sniffed at.
If you've not heard it then all I can say was that it really was as bizarre a combination as it may sound.
Anyway to cut a long one short, I knocked up two mashups recently, so seeing as they'll only get up to no good sitting on my hard drive, I thought I'd give them to you lot for safe keeping under the collective name, 'The Mashing'.
Tracks:
Sisters Of Mercy Vs. Sir Mix-A-Lot - Baby Goth Back
The Cure Vs. Duran Duran - Girls In A Forest
YOU KNOW YOU WANT IT.
Posted by Cruel Britannia at 15:55