And because I nearly forgot...Dead Eyes Opened.

...back in October, Edinburgh-based dark rock trio Dead Eyes Opened asked me to do a remix for them.
So they got three. It was a productive weekend.

Posted by Cruel Britannia at 10:25 No comments:

2015 is brought to a close with the release of a couple of remixes I completed for two very different yet very good bands in their respective fields.

I gave this the '12" goth club mix' treatment; big sound, strings, piano and reverb aplenty.
https://soundcloud.com/cruel-britannia/new-zero-god-shut-up-cruel-britannia-remix
Posted by Cruel Britannia at 10:18 No comments:

I'm very pleased to be able to let you guys now hear my remix of a track from the forthcoming album 'Time And Tide' by Dawn Of Elysium (https://www.facebook.com/DawnOfElysium/)

The track is called 'Smoke And Mirrors' and rather than me going to town with the drum loops, samples, synths & the usual technical fuckery I indulge in, I went for the '12" club remix' approach instead, opting to leave as much of the original track intact, but a bit longer and shinier...yes, it took a shedload of will power to stay away from the gadgets...

Time And Tide will be released in the autumn and you'll likely hear this track on an EP planned before the album release.

https://soundcloud.com/cruel-britannia/dawn-of-elysium-smoke-and-mirrors-cruel-britannia-goth-mix
Posted by Cruel Britannia at 12:39 No comments:

Posted by Cruel Britannia at 13:26 No comments:

So, because of this, I was inspired to compile this.

30 things I’d be happy to live without if my experience of them never occurred again.

1. Game Of Thrones. I couldn't possibly ever give a shit, even if good money was thrown in.
2. Self Service Checkouts.
3. The film 'Up'. My life is tragic enough without showing me worse through the medium of CGI.
4. Flares. I hate you, Mother.
5. Smoked salmon
6. Claret. That shit tastes like socks. What's wrong with you people?
7. A night on Shell Island without alcohol or drugs
9. Ankle socks. I want comfort all the way up my shin or none at all.
10. Special chocolate for diabetics
11. Being sober around drunk people at 1am
12. Being sober
13. Black nail polish. From now on, Whitby Gothic Weekend has me as I come.
14. Being the focus of someone's extremely short sexual attention span
15. Radio 1
16. Realising your inner thighs have worn holes through your skinny jeans so the blob of flesh it emits look like my testicles have found an escape route.
17. Iain Duncan Smith
18. Glampers
19. People who discover I'm a goth and then squander valuable oxygen telling me about the time they once developed a reel of film for Ozzy Osbourne back in 1981.
20. American TV adverts (30 seconds of product sale followed by 5 minutes of legal disclaimer)
21. In The Night Garden. If you're a toddler, it's great. If you're an adult, that stuff will give you weapons grade nightmares.
22. Having to change razor brands because my favourite no longer exists.
23. Netflix's 'rated for you' selection. It's not, is it? You're just hoping I'll watch something that hasn't been seen since it was last available on Betamax format.
24. Steak. Sorry, I just don't.
25. People who stop to catch up in the middle of the shop aisle
26. Similar to above; people on mobility scooters who park themselves diagonally to browse
27. Charity chuggers, specifically those who can see that you're visibly laden down with bags of shopping in each hand
28. My inability to actually tear myself away from Independence Day whenever they show it on TV for the 50,000th time
29. Neglected looking pets. I don't have the space to steal them from their owners in the night and keep them here.
30. Cars with eyelashes on the headlights. I will burn your V5 document on the blazing pyre made from your immediate family.
Posted by Cruel Britannia at 12:28 No comments:

I got interviewed by Gothic Beauty Magazine. It was great.
http://www.gothicbeauty.com/2015/05/world-goth-day-black-celebration/
Posted by Cruel Britannia at 13:20 No comments:

A Case Of Cuckoo Behaviour

AN UPDATE TO THIS POST:
I've since been advised that the application for the trademarking of the name and logo had been cancelled on the 21st November 2014 by the Intellectual Property Office. The link to view this cancellation can be found here:

I'm going to try and do this without naming names because it's less to do with the persons involved as it is to do with the principle. It's blatantly obvious who I'm talking about, but again, not the point.

A band of some considerable pedigree from the 1980s reformed with all but one original member in 2009 after heavy campaigning from Facebook users, but eventually lost some of its members to unexpected but voluntary resignations around a year ago, citing personal differences. The band has since carried on, slowly replacing band members, writing new material, rehearsing and playing live. Throughout this time, the band did not announce a hiaitus, a split or suspension of any kind. It has, to all intents and purposes, remained active since reforming.

More recently, one of the ex-members has formed a band of their own (which is only to be expected and/or encouraged). However, they also took the peculiar step of adopting the same name as the band they left of their own accord, used the same band logo and with their new lineup, drafted other ex-members in not so much for their talent as to fulfil an agenda, and leaning heavily on an early and extensive back catalogue.

The latter is not particularly heinous-it's the stuff of tribute bands after all, until you factor in that this other band are passing themselves off as 'the real thing', and that the ex-member's previous yet still active band of the same name are not worthy of that name.

Worse still, there has been very strong evidence that they have been complicit in actively attempting (and encouraging other people to attempt) to sabotage potential efforts of the original band to play live, contacting promoters to cancel existing arrangements and even using latent blackmail.

There are other issues; this new band has no legal right or permission to use the band logo (legal proceedings currently exist around this, backed up with evidence that I've seen with my very own eyes), an air of abject sexism regarding the band lineup also exists, citing that somehow having a male vocalist makes them better than the ex-member's old band, and finally, easily traceable articles on the internet which are little more than petty, unproductive slagging off of members of his old band. The list will inevitably get longer and the damage to the reputation and legacy of the band cut deeper as time goes on.

For clarity, the two bands are sonically different, and both bands contain more than capable, talented musicians. There would be no reason at all for the newer band to not simply concentrate on writing new music, work to refine their sound and exist in the live music arena alongside every other band. But this does not appear to be their modus operandi, and this frustrates me. Their chosen path is to claim to be the 'true sound' of the original band (ignorant of the concept that as bands age, the music will almost inevitably mutate and mature) and to all but purely exist in the name of living off the bones of past glories whilst actively attempting to ruin every move made by a band already existing under that name. This makes them no better than cuckoos, taking over an established nest and making it their own without any thought to the consequences of their actions.

Personally, I don't think that this is a healthy attitude to take as group of musicians, to be essentially led by one member's personal grudge against his old band. It will do either party no good whatsoever. It will divide opinions within an already small and divided scene. It will deter promoters from having anything to do with either band. It will potentially put music lovers off from giving either band's music a fair and unique listen. It will almost certainly damage the hard work being undertaken in both bands, be it revisiting old songs or writing new songs alike.

As I've mentioned before; small scene is small. There is no excuse; we haven't suddenly run out of ideas for melodies from which new and exciting material can be created, we don't form bands purely out of animosity or jealousy, and we certainly do not rope people into a grudge match when they had no prior connection to the original dispute.

We've seen the all-too-confusing situation which existed with Christian Death, and the petty legal wrangling over the use of the name The Sisterhood by ex-members of The Sisters Of Mercy.
The only winners are lawyers, the only losers are the audience.
If you care about your art, move on and develop it. That's why it's called 'art' and not 'weapon'.
Posted by Cruel Britannia at 06:28

In one week and two days, Fadeout will have been in existence for eight whole years. The Other Fadeout & follow-on 'proper goth show' The Haunted Wardrobe were started in November 2010 and September 2011 respectively. in between those eight years, a number of mixes and mashups were created.

And it's all kept on this tiny USB memory stick. 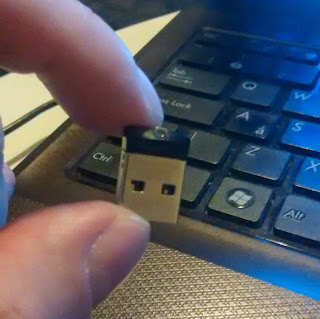 Posted by Cruel Britannia at 14:06 No comments: